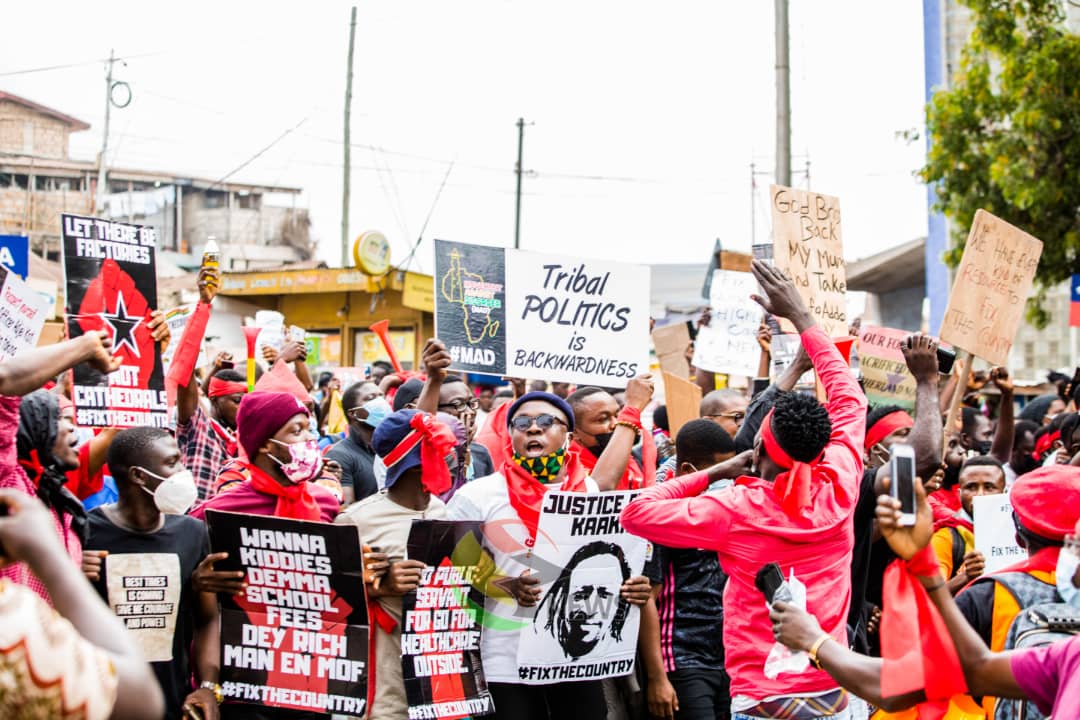 Some of the #fixthecountry demonstrators who failed to wear their nose mask during the march were forced by the police to do so, the Greater Accra Region Police Public Relations Officer, ASP Afia Tengey, has said.

She stated that some of them had the nose masks in their pockets but did not want to wear whereas, others didn’t have it at all.

Those who didn’t have it at all were made to purchase some to enable them partake in the protest, she said.

According her, gatherings of such magnitude do not make it a reality for people to practice social distancing.

She further said “Initially, we realized that most of them were not wearing the nose mask and so we had to force the, to wear it. Those who did not have were made to purchase one  and secondly those  who had theirs in their pockets  they were directed to wear them. That aspect we can’t have it completely as we expect but it was ok.  Regarding social distancing, that has been one of our bane because we know that there is no way people will gather such a magnitude and still observe what we call social distancing.”

Hundreds of Ghana s joined the fixtehcountry demonstration in Accra to demand better conditions of service from the leaders.

Dozens begun the protest march from the Obra Spot.

Most of the protesters were in red with a few draped in the colours of the national flag.

From the Obra Spot, the protesters used the Farisco Traffic Light road at Adabraka through the TUC-Kinbu road and then ended up at the Black Stars Square.

Leader of the Economic Fighters league, Ernesto Yeboah, said that the 1992 constitution is problematic.

He said the document is a tool used to rig and steal from the people of Ghana.

He said “We are re-giving birth to Ghana. This is a reborn of Ghana  everybody here has answered to the  roll call and that is precisely what is happening .

He further accused political leadership of ripping off the nation through constitutional leadership.

“That is why they are stealing and ripping us in broad day light under the guise of the constitutional leadership.

“What we have is not a Constitution, it is a note book for stealing and rigging and plundering the state.”

“Recently, we saw what Article 71 office holders did  and we also saw what the same group of people have done for workers in this country  in terms of increment in salaries, 4%. So there must be an awakening.”